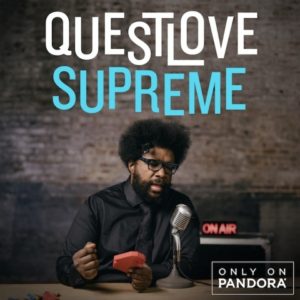 ” . . . a raw and ingenious three-hour show curated and produced by the four-time GRAMMY winner. The show will be a weekly ride through the global musical landscape featuring adventurous music selections, compelling conversations and revealing interviews with music lovers from the entertainment industry and beyond. The show will have a similar music intensive feel to Questlove’s popular New York University class.”

There are two reasons why I’m stoked about this. First, it sounds like the Questlove program will at least aspire to serve up content that is both entertaining and thoughtful. Second, here’s the veritable symbol of individualized Internet listening offering what amounts to a conventional, real time, mass audience based  (dare I say it) . . . radio show.

The New York Times has a nice piece on the move titled “Pandora Looks For a Way Out of the Doldrums.” What interests me the most the use of the word “radio.”

“For Pandora, which has clashed with the music industry in the past, the involvement of an authority like Questlove — whose group is the house band on NBC’s ‘The Tonight Show’ — is an important endorsement as the company embarks on its biggest challenge yet: expanding its service beyond radio to compete directly with Spotify, Apple Music and Tidal.”

The term “radio” has now become even more subjective than it was five years ago (and I thought it was amazingly subjective then). So how come Pandora is “radio” and Spotify, Apple, and Tidal aren’t? The latter three services all offer personalized music streams of one kind or another. They’ve all to various degrees have redefined radio as a hyper-individualized on-demand or modified on-demand medium. And, in Pandora and Apple‘s cases, they’re now experimenting with old school mass audience radio in order to, well, I’m not actually quite sure why they’re doing it.