By Matthew Lasar on July 6, 2015 in Community Radio, Pirate Radio

The United Kingdom is so famous for its pirate radio stations that Hollywood made a movie about one. But as always the government is quite dour about these unlicensed signals, and has shut 400 of them down recently, according to a newspaper report.

The London Evening Standard says that a quarter of the crackdowns over the last two years took place in and around Haringey, North London. 50 further raids focused on “suspected pirates” in Lambeth, South London. An official for Ofcom, the UK’s broadcast regulator, told the Standard there are still “about 70 active stations in the London area” and maybe 100 more around the rest of the country.

“From the enquiries we’ve carried out, this problem doesn’t exist in New York or Rome or Paris,” he added, “it’s a London phenomenon.”

The newspaper got these figures via a Freedom of Information request, presumably similar to our Freedom of Information Act protocols here in the United States. But the Standard hasn’t published the whole list. Ofcom provides some statistics about interference complaints on its Enforcement Page and, sure enough, most of the broadcast related gripes come from London.

Ofcom has an advisory web page against pirate radio. “There is a way you can take to the airwaves without breaking the law,” the document notes. “There are now over 200 community radio stations broadcasting in locations across the UK.”

According to this map, ten of them have licenses in Greater London, but it sounds like the city needs more. In any event, here’s a map of where the government thinks the unlicensed London broadcasters are operating from (aforementioned counties, [oops, boroughs, see comment below] circled in red): 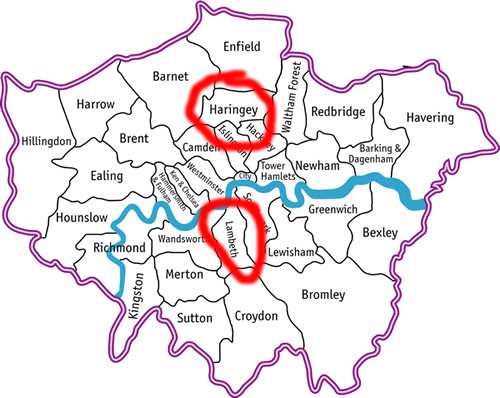 Anger follows Cumulus closure of KGO’s South Bay wing
Zambia to community radio: you are on your own
Support Radio Survivor on Patreon!