After sitting through the Celebrity Economy in Music panel at last week’s SXSW, which featured economist Paul Krugman and the principals of Arcade Fire, I sat down outside and collected my thoughts. If touring is overwhelmingly the main way that artists make their money, I wondered, what is everything else for? I scribbled out a rough “everything else” list:

This struck me as a very crowded taxonomy of supplementary revenue generators. How much was AM/FM radio still in the picture, I wondered, and proceeded to buttonhole younger musicians at the conference with a single question: how important is broadcast radio to you?

The answer I received in a series of informal off-the-record discussions was, overwhelmingly, “not that much.” This statement should be qualified. Most of these musicians told me that they would like to be on the radio, but it either was not a sine qua non goal for them or seemed too difficult a task. Their responses also depended on their music genre.

Take the young garage rock, transgender singer I spoke with at my hotel while we waited for rides to the convention center. “Radio just isn’t that important to us,” s/he explained while smoking a gold filter colored cigarette. The top priority of the band in which s/he sings is getting gigs and touring, I was told. “Working, performing, and getting paid, that’s everything. We just want to play.” What was next in the order of priorities? Getting on all the online venues: BandCamp in particular. But this artist’s group had solved that problem by getting an account with Tunecorp, which does all kinds of online distribution for music groups. Tellingly, Tunecorp’s partners, with the notable except of iHeartMusic, are all overwhelmingly digital. Hardly any of its roads lead to AM/FM.

I received similar responses from the various hip hop deejays, performers, composers, and producers with whom I talked. The main priority for them is getting gigs at clubs and houses, obviously. So the immediate Holy Grail is making connections with the people who book acts across networks of cities, and getting noticed by huge online news/review venues like AllHipHop.com. As for radio? Not really, a young hip hop composer/producer told me while we waited for our Korean barbeque tacos (yes way) outside the convention center. “I mean, I know of individual artists who have gotten hits because they got on the radio, but most of what’s on radio stations just doesn’t feel like it has a lot to do with what I do.”

When I started a conversation with one hip hopper between panel discussions, he proudly informed me that he had finally gotten some “rotation” on one show at a popular FM station in Washington, D.C. “Once you get on the radio, you blow up!” he exclaimed. But when I asked him how long it had taken for him to make that connection, he smiled a bit ruefully. Two years, he conceded. “It’s great that I’m getting some play, but I’m just not going to put all that investment into promoters and materials to get on the radio. We’re talking thousands of dollars.” 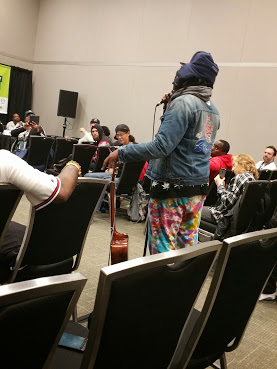 One of the most informative SXSW panels I attended was the Hip Hop Deep Dive, in which a group of aficionados played new tracks off of SoundCloud and the audience, mostly artists and fans, discussed them. Nobody talked about radio until the subject came up (I asked). Then it was, like, oh that too.

“Sure, radio’s important,” one panelist said. “There’s a lot of people who still listen to radio: families, people who, believe it or not, still can’t type in a URL address.” Nobody used words like “rube” or “bumpkin” in this conversation, but they might have well have. A young man sitting in front of me handed me a free DVD of his latest opus. “Is radio important to you?” I asked him. “Somewhat,” he hastily replied, then scurried off to promote his work to other producers in the room.

People with whom I spoke did acknowledge one kind of FM to which they felt they still had access: college radio. Both that hip hop producer with whom I enjoyed tacos and a young middle school teacher at the hip hop panel praised college radio as available and accessible. The teacher mentioned that his music had been repeatedly played on a college radio outlet in his town. But both also suggested that college radio was exceptional—very different from the commercial version, where they see far more promotional potential.

This is all anecdotal evidence, of course. Everybody I spoke to noted that there were still genres where AM/FM radio is very important, most notably country music. I’m going to share the comments of a country music promoter who spoke at the conference soon.

But compare the ‘meh’ attitude towards radio of those aforementioned hip hop promoters to the fond remembrances of various older rap artists who spoke at an SXSW panel on the legacy of the Roland TR808 drum machine. These included Arthur Baker, Hank Shocklee, and legendary radio deejay Funkmaster Flex, who worked at New York’s WRKS and WBLS in the late 1980s. They spoke reverentially about the access that rap artists had in New York back then.

“What was dope about the eighties,” Flex recalled at the panel. “I used to love [going to] Danceteria and different clubs. You would see the record label person hand the deejay the record, the radio deejay . . . It used to be amazing for me to watch Chuck Chillout get the record, listen to the record, and play the record.”

“He would play the record right away,” another panelist noted.

“It was amazing,” Flex agreed. “The [radio station] program director would give control directly to the street deejay – he had the date – to play that record. And they would monitor the 12 inch chart that was controlled by the mom and pop stores, and that’s how they would put a record into daytime rotation.”

From the street to the club to the radio stations, followed by a check-in with local record stores. I don’t want to fall into the nostalgia trap, but it does seem like a more transparent world. My next post will report on two SXSW panels that discussed how to get the attention of music producers and deejays at NPR and the BBC. They say they’re still getting tons of inquiries.

Poll: Is getting on AM/FM radio still important for young musicians?
Review: TIDAL Streams Uncompressed Music to More Devices, but Not Worth It for Everyone
Support Radio Survivor on Patreon!