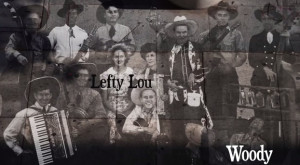 Aric Allen has a compelling YouTube documentary about the impact of radio on Woody Guthrie’s life and career (although I’m not sure Guthrie would approve of the c-word). “California turned Woody into a radical but in 1937 Los Angeles turned him into a radio star,” Allen contends.

“He was just a 24 year old sign painter,” the doc notes, “one more husband and father trying his luck out west.” Guthrie hitched rides and boxcars to Glendale, California in May of 1937. His father’s sister’s family lived there. He stayed in flop houses and struggled to get by. Then in July his cousin Jack, a “wannbe singing cowboy” “charmed his way” onto station KFVD with the “Oklahoma and Woody Show.”

Woody played the sidekick. The program was “heavy on songs” and “light on talk” and Jack lost patience with it. Woody, however, stuck around and got his cousin Maxine to join the program. They made an excellent singing duo (he nick named her “Lefty Lou”). It was a huge success. In fact, on good nights, KFVD streamed all the way back to Texas, where Guthrie’s wife could listen.

The rest of the story is told here; a video definitely worth viewing.