NPR reports that one of its most beloved and distinguished correspondents, Margot Adler, has died at age 68 after a struggle with cancer.

The NPR remembrance observes that Adler shaped “what we would call the NPR sound today: human, curious, conversational.” It should be noted that prior to her joining NPR, she was a mainstay at the Pacifica radio network in the 1970s. Many of her interviews and commentaries from those years can be found at the Pacifica Archives. These include conversations with Joseph Cambpell and I.F. Stone, and her explorations of Paganism and witchcraft. 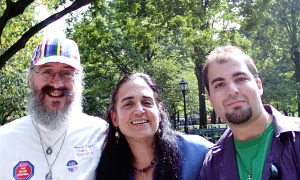 Born in Little Rock, Arkansas, Adler was the granddaughter of the famous psychiatrist and associate of Sigmund Freud, Alfred Adler. She did most of her work with Pacifica at WBAI-FM in New York City, and joined NPR in 1979. The photograph on the right identifies the three individuals as “Author and Druidic priest Isaac Bonewits, author, Wiccan priestess, journalist, and radio presenter Margot Adler, and artist, hacker, and radio presenter Rob Vincent at the 2004 Pagan Pride celebration in Battery Park, New York City.”