By Matthew Lasar on April 10, 2014 in Electronics, Rough Notes 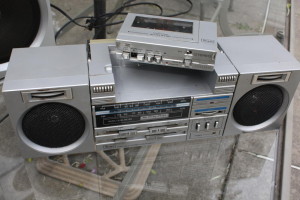 I’ve been rummaging through old articles about the emergence of the Walkman in the 1980s, and one thing stands out: some people thought it was a social cure for the Boombox. Here’s an excerpt from an old column by George Will, responding to the charge that the Walkman isolated people from each other.

‘Some sociologists and other cranks are quite cross about the popularity of the Walkman,” Will wrote in June of 1981. “They say the device is ‘isolating’ and prevents people from ‘relating.’ I say: Yes, and isn’t that great?”

“Leaving aside the fact that a walk with Bach is bliss, who wants to ‘relate’ to strangers in the street or seated next to one on airlines? Who does not want to be isolated from the blather and screech of metropolitan life? Walkman is the civilized answer to something that should be illegal—those 20-pound stereo ‘boxes’ carried by young men with strong backs and bad manners, ‘boxes’ that pummel the ears of anyone within 50 yards.”

As this commentary was published, city police in New York and elsewhere were confiscating Boomboxes and handing out summonses by the dozens. Meanwhile, still somewhat pricey Walkmans sold by the ton, their owners tipping their headphones to each other on the street.

”It’s just like Mercedes-Benz owners honking when they pass each other on the road,” one Yuppie told The New York Times. Reading Walkman related articles from back then, I’m struck that when most big city newspapers covered the technology, they assigned fashion reporters to the story. At the same time, the Boombox was increasingly relegated to crime pages.

“Nobody ever asks the fellow who totes it to turn it off,” a Washington Post commentator complained. “That’s’ because he’s usually eight feet tall and weighs 400 pounds. If he’s small, he is generally believed to conceal a knife in one pocket and a zip gun in the other.”

Spike Lee got at the racial angle in this tension via his 1989 masterpiece Do the Right Thing. Remember Radio Raheem?

For my own Boombox experiences check out this essay.