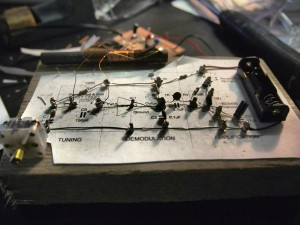 Recently I’ve been following with interest the wide range of hands-on radio activities being lead by Radio Arts out of the United Kingdom.

Radio Arts, “an independent artists’ group founded in 2001 by lecturer, producer and artist Magz Hall and artist, producer and musician Jim Backhouse,” works “to promote radio as a site for creative experimentation and intervention.” The group is “currently commissioning six new radio art works for broadcast as well as running a series of free, public workshops across South East Kent until early 2014.”

As part of this project, Radio Arts is completing a residency aboard the restored lightship LV21 (Light Vessel 21) in Kent, England. One event that caught my eye was last month’s radio workshop in which participants built their own AM radios. According to Magz Hall,

“As Radio Arts we have been promoting radio arts activity through number of workshops and an open call for new work – this particular workshop to make an AM radio was the result of a collaboration between Radio Arts and the Lightship and its radio operator Colin Turner who shared his skills in AM radio building with us.”

Next month, there will be another hands-on workshop for radio-o-philes. On January 25th, lucky attendees will get the chance to make their own FM transmitters at an event held at the Beaney in Canterbury, England.

Additionally, Radio Arts just wrapped up an open call for recorded radio pieces for a future program and has been collecting old, working FM radios for an April, 2014 exhibit at the Beaney. More details on how to donate can be found on the Radio Arts website. 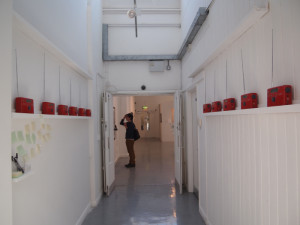 Across the pond, Hall also has her radio-themed “Numbers” installation on view at the Canterbury Exchange exhibit at Illinois State University in Normal, Illinois through December 15th. It looks like a fascinating piece.

Hall explains, “The installation is in part homage to shortwave numbers stations, on air since the cold war and plays a series of coded messages from provocateurs of the future heard as numbers from six voices played simultaneously on different radios around the space. The work predicts numbers stations will move to FM and will remain there after licensed FM services are switched off, to be used by outlawed gangs, groups, agents and political movements. The work uses encrypted tweets collected from Occupy activists.”

Hall was able to get folks in Illinois to donate radios for use in this numbers station-themed installation. I wish I could be in both Illinois and England to take part in all of these radio events and exhibits, but for now will just live vicariously through the online accounts.