By Jennifer Waits on December 17, 2013 in Religious Radio 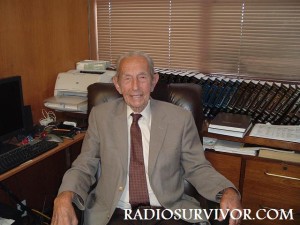 I was saddened to hear the news that Family Radio founder Harold Camping died on Sunday in his home in Alameda, California after complications from a fall that he suffered on November 30. The Christian radio mogul and long-time talk show host achieved worldwide attention in 2011 when he embarked on a massive media blitz in order to spread the word about his prediction of an impending Judgment Day on May 21, 2011 and subsequent end of the world on October 21, 2011. His predictions didn’t come true and Camping became less of a public presence at Family Radio in the following months, particularly after suffering a stroke in June, 2011.

Although I was not a follower of Camping’s religious teachings, I was amazed by his longevity in the radio industry. Nominated for a spot in the Bay Area Radio Hall of Fame this year in the radio executive category (he lost to KLOK’s Bill Weaver), Camping hosted a live call-in talk show for more than 50 years.  As the predicted Judgment Day of May 21, 2011 approached, he was on the air doing his live radio show up to 7 times a week, as well as his Family Bible Study show. After beginning with one radio station in 1958, Camping built Family Radio into a global radio network, with valuable radio and television stations in major cities in the United States. Other stations are spread across the country and a Family-Radio-owned (until recently) shortwave station beamed broadcasts all over the world. Family Radio also produced religious literature in a dizzying number of languages (at least 68) at its Oakland headquarters and would also provide audio recordings to listeners upon request. 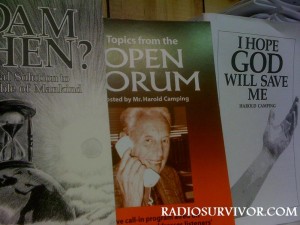 I first became aware of Camping while on a road trip to Santa Barbara in spring 2011. As I scanned the radio dial and landed upon one of his Open Forum broadcasts, I became riveted by his radio persona. The certainty with which he was predicting the world’s end was fascinating to me. On the live talk show, caller after caller would question Camping about his predictions and he remained unwavering in his beliefs. Claiming that through close scrutiny of the Bible he’d arrived at the conclusion that rolling earthquakes would mark the beginning of Judgment Day on May 21, 2011 at 6pm “local time,” he refused to entertain the notion that he could be wrong. After hearing his show, I knew that I wanted to learn more about Family Radio, so I arranged a visit to its Oakland headquarters.

I visited Family Radio on May 12, 2011, less than 10 days before the predicted Judgment Day. Although I had arranged my visit in advance, my contact at Family Radio made no promises about me being able to meet and talk to Camping. I was, however, invited to watch the taping of the Camping-hosted Family Bible Study (which was being recorded for radio and television).

Family Radio was swarming with reporters from major networks and publications, but I patiently waited in Family Radio’s lobby after watching the Bible Study and after taking a tour of the station. Finally I was given an opportunity to interview Camping. We sat in his office for a few minutes and I mainly asked him questions about radio. He was visibly exhausted and it sounded like he’d barely even had a chance to eat lunch. Although he bristled at a few of my questions that he deemed too personal, I’m sure that he also found it refreshing that I asked him about his lengthy radio career. He revealed that he wasn’t initially interested in radio. He told me,

“I was interested in dairy cattle and I was interested in math and interested in physics and science, but not radio…Someone came to my office…and he wanted to find some Christian businessmen to buy a radio station and share the gospel. And, oh, to share the gospel, that’s what got my interest. So, I agreed that provided we have a non-profit corporation so that nobody could ever realize any gains for themselves. And so, we formed a non-profit corporation called Family Stations, Incorporated. I became President and he became Vice-President. I had another young man working for me and we made him the third member to be legally a qualified corporation. And I put this man on my payroll…and he found a station here in San Francisco and we bought it and that was the beginning of Family Radio.”

On a lark, Camping started his call-in talk show, initially as a way for listeners to ask questions about Family Radio programming and finances. He didn’t anticipate that callers would instead ask him about the Bible and would ask for his advice. Camping told me, “And I found that I enjoyed that very much and I was somewhat qualified because I had been doing quite a bit of study in the Bible and doing some private counseling. And so that began Open Forum.”

Although Camping expected his final Open Forum to be just before Judgment Day, he was back on the air on May 23, 2011 with a special press conference-style Open Forum with the media. Following that, live episodes continued through June 9, 2011. After Camping’s June 9th stroke, Open Forum went on “hiatus” and repeats were aired. Eventually replacement programming was broadcast instead.

Eventually, Camping came around to the idea that Judgment Day may have been “spiritual,” rather than physical, meaning that his prediction of the end of the world 6 months later would probably stand. When the world did not end in October, 2011, Camping eventually acknowledged that he may have been wrong and he announced that he would no longer be making predictions. With Open Forum off the air, Family Radio continued to satisfy listeners’ desire to hear from Camping by posting occasional recorded messages on its website.

My thoughts are with Camping’s family, friends, and colleagues. He leaves behind a wife of more than 70 years. Considering some of Family Radio’s recent financial challenges and station sales, I will be interested to see what Camping’s death means for the future of Family Radio.