By Jennifer Waits on August 5, 2013 in College Radio, FCC 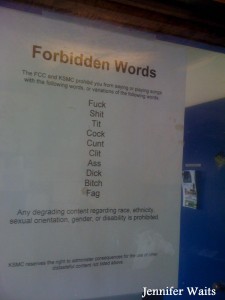 In reply comments submitted to the FCC, College Broadcasters Inc. (CBI) argues for a softer stance on the broadcast of indecent material. In its filing (PDF), CBI asks the FCC to cease enforcement of its fleeting expletives policy. CBI writes,

“The enforcement of a ‘fleeting expletive’ policy is resource intensive, constitutionally suspect, creates a chilling effect, and unnecessarily puts existing Educational Stations in unnecessary jeopardy and potentially impedes the development of more of these stations.”

The comments go on to suggest that the more experimental, DJ-driven programming found on student-run, educational radio stations is less predictable than what can be heard on professionally-run stations. Mistakes can happen and live interviews and performances can inadvertently contain questionable material. In light of this, CBI asks for understanding, stating,

“Educational Stations have often historically seen their mission as including coverage of events on a campus and in the community, supporting a marketplace of ideas by providing a platform for discussion of issues and ideas. In doing so, they engage a wide range of participants, whether in the studio or on location —some of whom may not be familiar with broadcast protocols. The nature of this programming—live, unpredictable, and at the core of First Amendment ideals—puts stations at risk under Golden Globes. The fleeting expletive enforcement policy threatens not only the very existence of these stations but also the ability to produce creative programming, which is often very edgy; of its DJs to curate playlists on the fly rather than through computer generated, non-responsive programming; and of the station to uniquely to serve the public interest through diverse programming seldom found on other types of stations, which are often not as responsive to local community needs.”

To inform its reply, CBI conducted a survey with college radio stations. One of the more interesting findings is that most college radio stations have such small budgets that a fine for indecency would have a devastating effect on day-to-day operations. When asked about a hypothetical indecency fine of $32,500, station representatives stated that such a large fine could destroy their stations. Comments included:

“It would devastate us. We would be in serious trouble.”

“It would shut our station down. We do not have that kind of money for a fine.”

“Likely push the University to consider possible sale of the license.”

“This amount represents the station’s budget for maintenance and operating costs for an entire school year. There is a good chance that we may not be able to operate at all as this is almost two years of our budget. We wouldn’t be able to pay any bills or belong to organizations, go to conferences, pay our staff anything, get equipment fixed, pay our engineer, promote fundraisers..I don’t think we would be broadcasting.”

CBI asks the FCC to not only cease investigations into the broadcast of fleeting expletives, but also asks the FCC to be more lenient on student radio stations for all instances of indecency complaints, in keeping with this year’s ruling in which fines were reduced for violations at KIGC-FM. In that precedent-setting ruling, the FCC stated that first-time violations at student stations would not be treated as harshly. CBI writes, “Further, CBI urges the commission to take a balanced approach to enforcement when it comes to Educational Station with a history of compliance. These two steps, taken together, would serve the public interest and provide these important and extremely fragile stations (and potential future stations) with the appropriate amount of breathing room in their endeavors to educate and serve the community.”