By Matthew Lasar on November 23, 2012 in Internet radio, Mobile Radio

It has been a year since I posted my review of the Kindle Fire as an Internet radio device. A lot of digital water has gone under the bridge since then, and I’ve replaced the Fire with a Google Nexus 7

. Sorry Kindle, but the Nexus 7 is the tablet for me. Nothing personal. I even prefer it to my iPad. The Nexus is light, versatile, and makes for a wonderful Internet radio. 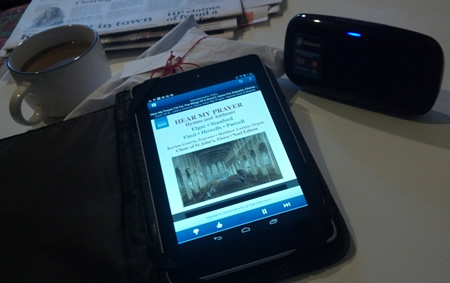 My Nexus 7 tuned to Pandora with an iLive Bluetooth speaker

Probably the best thing about the Nexus 7 are its navigation features. Simply by dragging desktop application icons on top of each other, a Nexus 7 user can create folders full of apps, then drag the folder to the six slot “dock” at the bottom of the screen (tutorial here). My “radio” folder includes Spotify, Pandora, TuneIn, Turntable.fm, Scanner Radio, iHeartRadio, BBC Radio, NPR News, Slacker Radio, and BeyondPod.

Here below is a screen shot of what my Nexus 7 folder for radio apps looks like:

The Nexus 7 has a better speaker system than the Kindle Fire, but not that much better. I tried the free versions of SpeakerBoost and Volume+ to enhance the volume, but neither worked on my device. What does work quite wonderfully is the iLive Bluetooth

powered external speaker that I bought at a neighborhood discount store for twenty dollars.

Once you have your Nexus 7 set up with your favorite radio/audio applications, you’ve got to make decisions about the audibility of other apps. Do you want want audio alerts from Google Talk, Facebook, and other instant/social message apps while the music is playing or the talk is talking?

I don’t want my Pandora classical channels interrupted, on the other hand, I do want to notice the alerts. Decisions, decisions . . .