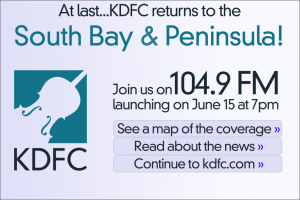 For over two months now, we’ve been sharing the news about Classical KDFC’s plans to expand coverage into the South Bay over 104.9 FM.

The FCC granted Principle Broadcasting’s request to transfer the license for formerly Spanish-language KCNL 104.9 FM to University of Southern California (USC) on May 21, 2012 and the deal was consummated on May 25; but USC and its San Francisco Bay Area classical radio outlet KDFC have been fairly quiet about the news. Test broadcasts began on May 25 and announcements about KDFC’s programming moving to 104.9 FM could be heard on the new station.

Well, the word is finally out and a notice dated June 1, 2012 on the KDFC website proclaims, “At last…KDFC returns to the South Bay and Peninsula! Join us on 104.9 FM launching on June 15 at 7pm.” An announcement by KDFC President Bill Lueth states,

“…thank you for your patience and your faith.  We promised our South Bay listeners we would not stop working to get you a better signal to hear Classical KDFC, and on the evening of June 15 it will be a promise fulfilled.

The new signal—104.9—will originate from the southeast side of San Jose and cover the entire South Bay all the way up to parts of San Francisco and Oakland. It will even reach parts of Santa Cruz and Monterey…”

In addition to granting the KCNL license transfer, the FCC approved USC’s request for the new call letters KXSC as of May 25, 2012. Yesterday the FCC also granted USC’s request to modify the KCNL (now KXSC) license status from commercial to non-commercial educational.

Although it will continue to be a non-commercial station (as it has been since January 2011), it’s an interesting twist that KDFC is coming back to the right side of the radio dial, as it was a commercial radio station when its brand was owned by Entercom. Starting in 2011, the KDFC brand was transferred to Classical Public Radio Network (CPRN), an entity that is 90% owned by USC and 10% owned by Public Radio Capital.

After purchasing the Angwin-based religious broadcaster, KNDL 89.9 FM (north of San Francisco), CPRN was able to change the KNDL call letters to KDFC. So, in addition to being USC’s classical radio “brand” in the San Francisco Bay Area, KDFC is the name of its flagship station in the North Bay. CPRN is also the proposed owner of former college radio station KUSF 90.3 FM. The application to transfer the KUSF license from University of San Francisco to CPRN is still being evaluated by the FCC, in large part due to protests by KUSF supporters who have filed numerous complaints with the FCC.

As part of the license modification, changing the former KCNL from commercial to non-commercial, the FCC is also allowing KXSC to waive the FCC’s main studio rule. The June 5, 2012 authorization states that, “The University of Southern California requests waiver of 47. C.F.R. Section 73.1125 to operate the proposed facility as ‘satellite’ of co-owned noncommercial educational FM station KDFC(FM), Angwin, California (Facility ID No.: 27946). Based upon the specific representations contained therein, the waiver request IS GRANTED. Applicant shall abide by each representation proffered in the waiver request.”

USC’s main studio rule waiver request states that in the absence of a main studio in Sunnyvale, KXSC will “satisfy the public needs and interests of residents of Sunnyvale” by holding regular meetings with the public, by establishing a toll-free phone line and email address, by maintaining a website with program details, and by placing its public file online.

When Principle Broadcasting owned KCNL, its main studio was actually located in San Jose, California, at the same location as sister stations KLOK and KSJO. All three stations aired brokered programming targeting various communities. With the sale of KCNL to USC, some of its Spanish-language programming will be moving to KSJO 92.3 FM.

Tune in the Wisconsin recall tonight with WORT and Free Speech Radio News
Farewell to author Ray Bradbury, the man who dreamed up Seashell Radios
Support Radio Survivor on Patreon!