By Jennifer Waits on December 7, 2011 in Commercial Radio, Religious Radio 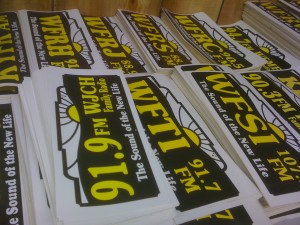 Christian radio conglomerate Family Radio is in the process of selling off radio stations in 2 major markets. On the heels of its November sale of WFSI 107.9 FM in Annapolis, Maryland to CBS for $8.5 million (Family Radio programming left the station’s airwaves last Thursday, December 1), paperwork was accepted for filing by the FCC today for the sale of WKDN 106.9 FM to Merlin Media. The Camden, New Jersey station, which covers the Philadelphia market, is expected to fetch $22.5 million for Family Radio according to the November 29 asset purchase agreement.

Although Family Radio operates its stations as non-commercial enterprises, some of the frequencies that it owns are on the commercial spectrum. In anticipation of the sale of WKDN, Family Radio requested permission from the FCC to modify the station’s license, changing it from non-commercial to commercial. The FCC granted that request on July 26, 2011. Similarly, Family Radio was granted a request in July to convert WFSI’s license from non-commercial to commercial. As of December 1, WFSI’s call letters were changed to WBGR and CBS is now airing a simulcast of its sister station WLZL’s Spanish language programming until December 11th. At that point, it’s expected that the WLZL format will permanently move to WBGR and WLZL at 99.1 will convert to all-news station WNEW by January 2012, while CBS awaits the FCC’s final decision on the license transfer. Through a Local Marketing Agreement (LMA), Family Radio is being paid for allowing CBS to utilize the WBGR airwaves, but the financial details of this arrangement were omitted from the license transfer application submitted to the FCC.

Leading up to these station sales (and big influx of cash), things have been relatively quiet at Family Radio in Oakland, California following the anti-climactic Judgment Day on May 21 and after the end of the world failed to occur on October 21. As we’ve reported, Harold Camping has posted several recorded announcements to listeners since that time. Most recently, he issued a written statement on the Family Radio website stating in part that,

“…Many of us expected the Lord’s return a few months ago, and obviously we are still here. Family Radio is still operating. What should be our thinking now? What is God teaching us? In our Bible study over the past few years, we came to the conclusion that May 21 and October 21 were very important dates in the Biblical calendar. We now believe God led us to those dates, but did not give us complete understanding. In fact, we did not understand at all the correct significance of those two dates. We are waiting upon the Lord, and in His mercy He may give us understanding in the future regarding the significance of those two dates.”

Additionally, Camping posted recorded messages on November 6 and November 8, explaining his thinking further. In his 7-minute plus recording from November 6, Camping (who is described as Family Radio’s President and General Manager in a recorded introduction) argues (in part):

“…whether we like it or not, we have to keep studying, keep examining everything and anything in the Bible that might relate. But, his people can arrive at conclusions too hastily not knowing that they are doing it too hastily and end up wrong. When we look at Jonah, and we find that he was pushed by God to get the message out and 40 days that city would be destroyed and so he had the very very unhappy conclusion of sitting there and there is no destruction. He was all wrong. But that’s where we are. So God has given us marvelous illustrations for us to look at and examine carefully to help us to see that God is always God. He’s always perfect even though he brings us to a point where we think wrongly that somehow we have been misused by God, just like Jonah thought he had been misused by God. It is true when we feel abused, we don’t want to put it on God ever.

So…where do we put it? On Family Radio. Because we were (Camping chuckles) the people who were saying what we believe what was true. We were convicted. We knew what we were talking about. And it is God who gave us the information what [sic] we were talking about. Then we have the hard the task of bringing thousands of minds back to understanding a little bit better how God is teaching in the Bible. And it’s unhappy because it sounds like we’re wishy-washy, we don’t know what we’re talking about, we’re not to be trusted. No one has treated this subject with greater care than we have treated this subject. We have been so careful. But, God didn’t open up everything to us. There were things he didn’t want us to say.

If 6 months ago, we had all the information that we have now, there would not have been the spectacle of the whole world learning about the Bible, learning about the fact that God someday is going to bring a judgment upon the world. It would not have happened. If we had known that and had reported that to the world, the world would be just like it was back in April and before. There would be nobody worried about God at all. But because God did not give us all the information and we used what we understand, God used that in a powerful way to remind the world that there is a God. They know there is a Bible and that that is the word of God. They know that there’s somehow going to be some kind of a judgment for their sins. They know that because it’s recorded in a Bible written by God. Six months ago the world did not know that. Only maybe a third of the world or maybe a little more than a third had any knowledge at all of that. That alone was a fantastic development for the world.

From now on, they’re going to be wondering, what’s Family Radio up to? What’s this business of Judgment Day? We know, it’s because an impact has been made that could only be made the way it was made. But, we still have the same God to whom we go for everything. We (laughs) We’re not going to find it by going out in the forest and look at trees. We’re not going to find it by talking to the people in the government. We have to go to God and ask for help. And in the meanwhile, we wait upon God until God does what he’s going to do. We’re going to talk about this again and again on Family Radio so that it will be an encouragement to all us.”

In his follow-up message (clocking in at a over 26 minutes) a few days later on November 8, Camping reiterates his position that Family Radio succeeded in spreading the word of God to the world. He argues that:

“When God did not bring about the end of the world as we had been thinking it would happen, we know that it’s God’s plan and we don’t argue with God. We’re not angry with God. We’re not unhappy with God. We simply say, oh, Lord, we misunderstood somehow or you changed your plan or whatever, but we’re willing to listen. What next, what next, Oh Lord.”

Using illustrations from the Bible, Camping explains that the non-events of Judgment Day can be compared to the story of Abraham’s willingness to sacrifice his son Isaac. He says,

“Now this is the way God has been treating us. This is one illustration. He has brought us right to the, well, (chuckles) ’til we had the sword in our hand. We were ready to say, ‘Goodbye’ all those who claim that they believed in the Lord and we know and we knew that there were probably two thirds of the world that had never even heard about the Lord. We were ready to say goodbye to them, it’s all over, it’s all over, it’s time for the end. And now at the last moment, God has come and said, No, No, it’s not the end, I still have some other plans.

So what do we do? What do we do? Do we argue with God? Wait a minute God, you said it so plainly, we were so convinced. There were so many proofs of the Bible that it cannot have been that we were incorrect. Maybe in a tiny detail here or there, but no God, we’re sure that it had to happen. But it didn’t happen and we know that God brought it right to the very edge, right to the very day and past the day that there should have been judgment seen all over the world.

As a matter of fact we know that only about a third of the world had ever heard of the Bible before 5 months ago. Now, by God’s mercy through the actions of Family Radio, as stupid as they some may think they may have been, as incorrect as some may think they may have been. Yet they all fit into a part of a plan where now the whole world has heard about the Bible. They’ve heard about the God of the Bible. God now is ready for the next action, based on that kind of information. What will that be? And that is where we have to start our thinking. We have to begin to think it out. How does all of that impact our future teaching of the Bible. And so, in our next study, we’re going to begin to examine that. Thank you very much.”