By Paul Riismandel on July 7, 2011 in International, Shortwave 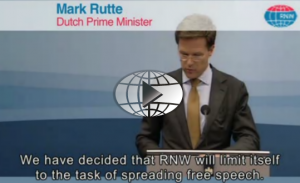 As part of a government austerity program, the Dutch Prime Minister Mark Rutte announced plans to make significant cuts in the budget of shortwave broadcaster Radio Netherlands Worldwide. RNW has been relied upon by both Dutch expatriates and other listeners around the world for a unique take on world events, in addition to news from the Netherlands.

In a press conference Rutte praised the service and articulated its revised mission:

“Radio Netherlands Worldwide will limit itself to one role, promoting free speech. I think the other tasks RNW performs are nice, valuable, but not enough to finance them with public money.”

As part of this plan RNW will be moved into the government’s Foreign Ministry.

The cuts at RNW come at the same time as other international broadcasters are scaling back as well. Germany’s Deutsche Welle is ending shortwave and mediumwave (AM) broadcasts while Radio Australia is also phasing out shortwave in favor of internet broadcasting. In general governments have cited the ability to reach listeners more easily over the internet as a significant reason for ending terrestrial international broadcasts. The Dutch government’s revised focus for RNW reflects this trend to retain terrestrial broadcasts only to regions that still rely on shortwave for international news and information.

However, that doesn’t mean that RNW and other prominent supporters will go down without a fight. The network has assembled testimony from a variety of prominent international voices in support the station and retaining its full broadcast service. Dutch national Willem Sools discusses the important role RNW played for him while being held hostage in Somalia in 2008:

“The whole time, we were able to listen regularly to a little radio, to stations including Radio Netherlands Worldwide. I wanted to thank you, even though you weren’t aware of it. I was able to hear everything about the Netherlands: interviews, documentaries, the news and, at Yuletide, typically Dutch stories about Saint Nicholas and Christmas – fantastic. Your broadcasts strengthened me a lot. Thanks.”

As the BBC and Deutsche Welle have phased our their broadcast service to North America, Radio Netherlands Worldwide has remained one of the stations that I could reliably tune in for high-quality world news in English on the shortwave band. Admittedly, shortwave radio is not a primary information service for me at this point in time, nor is it for most people in North America. However, I’ve appreciated the service in times when I was traveling and there wasn’t another good news source on the AM or FM dial, or when there’s been a power outage and I’m tired of hearing “traffic and weather on the 8s.”

I suppose it is a good thing that the Dutch government seems to want to maintain broadcasts to the developing world and regions where it wishes to promote free speech. However, it is hard not to lament that the era of ubiquitous global shortwave broadcasting is coming to an end.