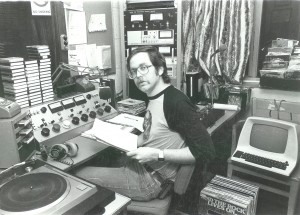 I’m very sad to report that Mike Schweizer, an important figure in San Francisco Bay Area broadcasting, died on Tuesday, June 14 at the age of 58.

Schweizer was the assistant chief engineer for University of San Francisco’s college radio station KUSF and had been with the station for more than 33 years. We met at the KUSF Wake back in March, which he attended with his daughter Elizabeth. Mike and Elizabeth brought the tombstones to the wake and they told me that Halloween had always been a big tradition for them. Their exuberance for the Save KUSF cause was inspiring, yet I was also saddened to see the loss of a station that they both deeply cared about.

In mid-May when I stopped by the KUSF studios, just as they were about to be dismantled, I learned from KUSF General Manager Steve Runyon that Schweizer was dying. It was hard enough walking through the old KUSF space in Phelan Hall without shedding a tear, and the news about Schweizer took the melancholic mood to another level. 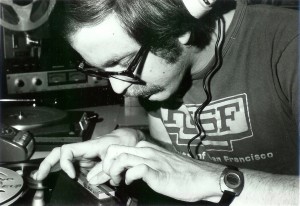 Not only was Schweizer an integral part of KUSF, but he also had his hand in the inner-workings of many radio stations in the San Francisco Bay Area. Recently he was nominated into the Bay Area Radio Hall of Fame in the engineering category (voting ends on July 10).

David Ferrell Jackson, Executive Director of the Bay Area Radio Hall of Fame and Museum posted on Facebook that, “Mike was incredibly generous — his vast collection of radio airchecks from the Bay Area, spanning nearly his entire lifetime, formed the core of the Bay Area Radio Museum & Hall of Fame’s audio archives, and he contributed an incredible number of priceless items (from T-shirts to broadcast equipment) to us. You couldn’t ask for a better, more generous person than Mike, and he’ll be sorely missed.”

This week I spoke with Schweizer’s daughter Elizabeth about the deep connection that she and her dad felt for radio:

Jennifer Waits: How did your dad get his start in radio?

Elizabeth Schweizer: My dad got interested in radio at a very early age. He used to tell me stories about the little crystal radio he built as a child, and how he would tell his parents he was going to bed but secretly stay up all night listening to stations around the country. He sent them postcards with reports of how he heard their signals and they would send him cards back, a collection my mother and I still have. He always loved the music, personalities and concept of radio and he knew from when he was very small that he wanted to try it himself.

Jennifer: When did he start working at KUSF?

Elizabeth: He started working at KUSF about a year after it went on the air. He hadn’t had any previous radio experience and this was his first exposure to actual behind the scenes tech access and air time. He said that like everyone else, he had to earn his stripes board-oping for other DJs until finally, he was given a time-slot after midnight, which he used to play his “After-Midnight Oldies Show” under the name Ray Michaels. He had quite a following in his time and would even take requests from his regular listeners, who he grew pretty close to.

Jennifer: What other stations did he work at?

Elizabeth: As far as I know, my father had his finger in every Bay Area station, even if it was a small role he had to play. He would work remotes for everyone from Clear Channel, to the Navajo nation and even went to Puerto Rico for Univision Radio. He only had programing on KUSF, but he helped engineer all sorts of remotes and did many office installations and transmitter work all around the country.

Jennifer: What was it like being a DJ at KUSF where your dad was an engineer, especially considering you grew up with the station?

Elizabeth: For me, I might never have become a DJ if it weren’t for my dad’s influence as Engineer. He helped produce all of my shows and we were able to do so from home with his equipment and nobody knew the difference. Since I was still in high school at the time and we lived across town, it made sense for me to pre-record my shows, but I regret never doing any studio time with his help. Everyone was extremely supportive of me once I decided to try a weekly segment and I know it’s because they all knew me through my dad.

Thanks to Elizabeth for sharing her memories with me during this difficult time. The radio community will deeply miss her dad. As one might expect since radio was so near and dear to his heart, Mike asked that if people wanted to make donations in his name, they could contribute to San Francisco community radio station KPOO or to FightColorectalCancer.org.