By Jennifer Waits on May 31, 2011 in Community Radio, Internet radio 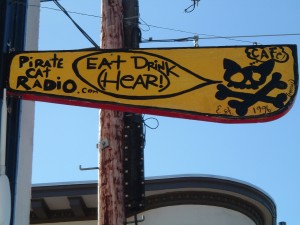 It’s been an interesting few months for Pirate Cat Radio to say the least. As we reported, the online-only community radio station broadcasting out of a cafe in San Francisco was taken off the air by its founder Daniel “Monkey Man” Roberts after a contentious call with Pirate Cat volunteers back in February.

Roberts, who had started Pirate Cat Radio as an unlicensed terrestrial station when he was a teenager in Los Gatos, eventually brought the station to San Francisco, where it operated out in the open in a cafe in the Mission District. Soon after an appearance on Anthony Bourdain’s “No Reservations” television show in 2009, Pirate Cat received a request for forfeiture from the FCC and has been off the terrestrial airwaves ever since.

Pirate Cat Radio had continued to operate until February 2011 as an online-only station, while Roberts had made some forays back into terrestrial radio by helping to get community radio station KPDO up and running in the coastal community of Pescadero and by attempting to purchase a terrestrial signal for Pirate Cat.

In part, these other radio projects may have helped to hasten the end of Roberts’ reign over Pirate Cat. After volunteers at Pirate Cat raised questions with Roberts about station ownership (they were told that an investor owned the cafe and that KPDO owned Pirate Cat Radio) and finances, Roberts took Pirate Cat Radio’s website and webstream offline. Roberts, who did not respond to a request for an interview, is believed to still be out of the country after leaving the U.S. last fall. When I spoke with him in March, he tried to address concerns about discrepancies over the ownership of the station and cafe and about his absence; yet several months later there are still unanswered questions and the stations that he managed (Pirate Cat Radio and community radio station KPDO) have moved on without him.

Following the February 13 website and webstream shutdown, Pirate Cat Radio staffers regrouped and renamed themselves the PCR Collective. They created a new website and webstream and have been working to continue on in much the same way as before, but without the leadership of Roberts (who they apparently have not been in communication with at all).

Tomorrow will mark yet another rebirth for the group, as they re-launch under a new, yet-to-be-revealed name at 8am. When I caught up with the station’s Minister of Programming Aaron Lazenby last Friday, he explained that they’ve felt like they’ve been in a “weird, interim period” since February in which they’ve been working to keep the station going. He said that they’ve also been developing a new identity for the station and it seemed like June 1st was the right time to start things over with both a new station name and a new coat of paint throughout the studio. Lazenby said that they have been “tired of living in the wake of that drama” and added “we’re ready to be something else.”

Lazenby told me that in advance of tomorrow’s name change, there will be a closing ceremony of sorts on the air at PCR Collective tonight hosted by DJ Nylon. Starting at around 6pm tonight, a number of long-time and former DJs will be coming back “to kind of close the book…on that era.” He said the closing ceremony will serve to “remember what was best about the time we spent with Pirate Cat.” Lazenby added, “We’ve been so surprised and pleased…with the work that’s been done…we don’t have that many hard feelings at this point.” He said that although it’s been a period of transition over the last few months, it’s also led to “collaboration that’s been awesome.”

Tomorrow morning volunteers will paint the cafe that houses the station and the hope is that the new colors and new look of the station will create an entirely different feel to the place (to see what Pirate Cat Radio looked like last year, take a look at my station tour post on Spinning Indie).

Although Lazenby was mum about the new station name, he did explain that, “We’re trying to find the right balance of where we’ve come from and where we’re going,” adding that they picked a name that “showed the scars” of the past, but also expresses where they are going. He said that they are looking forward to having a new name, new logo, new T-shirts, etc. This summer they expect to also host a block party celebrating their new future as a station.

Lazenby also told me that the station is full of new volunteers, many of whom are largely unaware of the prior drama at Pirate Cat. Although there are plenty of veteran DJs, he guesses that about half of the staff is are new to the station. As in the past, they plan to continue on as a volunteer-run, community-based station. The main changes are to the leadership structure (it’s now a collective) and to the communication style (“a lot more transparency”). Lazenby, who started at Pirate Cat 3 years ago, said that he’s optimistic about the station’s future, especially since they made it through the past 3 months and have been able to keep the station running and online. He said, “We’re all really proud of that. And now we get to really enjoy it.”

What makes a community radio music program great?
Boston pirate bust is a lesson in the slow grind of bureaucracy
Support Radio Survivor on Patreon!