By Jennifer Waits on March 5, 2011 in Community Radio 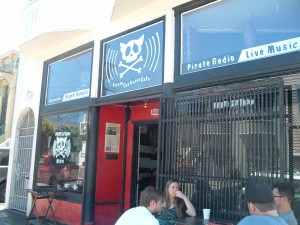 In his call with me he provided some clarification on the ownership of Pirate Cat Radio (an online-only radio station that also operates a cafe at the same address in San Francisco’s Mission District).

He said that he owns 20% of the café business, with 80% owned by an outside investor, Raymond Chen. According to Daniel, Raymond claims to be a majority owner in the Pirate Cat radio station as well and that is where the ownership dispute comes in to play. Because of this assumption, Daniel says that Raymond filed paperwork with the city of San Francisco indicating that Pirate Cat Radio Inc. owned the online radio station.

Daniel told me that there are “three different entities” related to Pirate Cat Radio and Cafe:

1. Pirate Cat Radio Inc.: a non-profit, which currently owns nothing according to Daniel. Daniel and Raymond are on the Board of this organization.

2. Pirate Cat Radio and Café: This is the cafe business, which was formerly a “sole proprietorship,” until Daniel sold 80% to Raymond Chen. Daniel still owns 20% of this business.

3. Pirate Cat Radio: This is the “radio operation.” Daniel states that its name is trademarked and registered to him personally. He says that the online-only radio station is currently owned by Pescadero Public Radio Service, which also owns KPDO. According to Daniel there was no purchase or “moving of funds.”

Daniel said that he had shared budget information with the staff of Pirate Cat and that the firing of volunteer DJ Pirata Margarita was not because of anything related to her questions about the budget; that it had to do with her “inciting” the volunteer staff. He admitted that he “poorly orchestrated the sale of the café,” but also stated that the new investor is “trying to put a wedge in this 14-year-old operation.”

Daniel added that he wished he could be in San Francisco right now, saying, “If I could, I would.” Although he’s not sure when he’ll be returning, he said that he does plan to come back to manage KPDO.

Today, Daniel issued a press release, which can be found as a comment to my earlier post. In it, he shares much of the same information that he spoke with me about, but also states:

“Earlier, in August 2010, I transferred Pirate Cat Radio, the web streaming operation, to the Pescadero Public Radio Service (PPRS) not-for-profit foundation, which is the owner of KPDO, the radio station in Pescadero. I did this because of several reasons:

The Pirate Cat Radio web streaming operation (PCR) was designed to be a non-profit community service, not a money-making company. PPRS is a not-for-profit corporation. Both PCR and KPDO have identical missions and similar programming formats. I felt it was only natural to merge PCR into PPRS.

Second, in order to get a good change of streaming on channels such as XM or Sirius, it was necessary to have a not-for-profit corporation, not an individual, running PCR. Rather than setting up a new corporation and organize another board of directors, it was easier and cheaper to merge PCR into PPRS…”

He also mentions that although Pirate Cat Radio is not currently operating, there are plans to open more stations:

“Pirate Cat Radio’s operations have been officially suspended for the interim. Despite the station being off-line, plans are already in effect to open 3 new Pirate Cat Radio locations in Seattle, Portland and Los Angeles by the start of 2012.”

In Daniel’s letter he explains that personal issues have required him to be out of the country. He says,

“During the past 6 months the stress of my work, fundraising for KPDO, and personal financial problems unfortunately caused a rift between me and those close to me. This has resulted in some personal complications and required me to go to Europe to get things in order. During this time I have been working on various radio and media projects through out Europe.

I have every intention of returning from Europe in 2011 when my affairs are in order, and resume my activities with KPDO, community radio, etc.”

To get more background on the history of Pirate Cat Radio and KPDO, read my field trip reports on Spinning Indie:

How to donate to KPFA without giving to the Pacifica Foundation
Chicago user-generated station Vocalo to re-launch with more convential format
Support Radio Survivor on Patreon!