By Paul Riismandel on March 3, 2011 in Podcasting 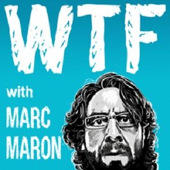 There aren’t enough hours in the day. I really like audio media, from radio to podcasts, but I just don’t have enough time and attention to take it all in. I commute to work primarily by bicycle here in Chicago, and there are only about 6 to 10 days every winter that make the roads to treacherous for the bike, forcing me to use public transport. On those days I delve hardcore into podcasts to make the El or bus ride go faster.

I add new podcasts to my queue very carefully and rarely. The last thing I want is to get a few minutes into a boring ‘cast at the start of my walk to the station. So, I have a bad habit of just listening to the podcasts of established public radio programs like On the Media. On top of that, there are so many podcasts out there I have difficulty sorting through them all to find something that makes the grade.

I’m really not sure what caused me to first check out WTF with Marc Maron at the start of the year, but I’m glad I did. Maron is a stand-up comedian who’s been on the scene since the early 90s. He did at least two stints as a morning host on Air America. And while I was never much of an AA listener in the first place, I’d always heard good reviews of Maron’s Morning Sedition program, but never heard more than a few minutes of it.

As far as I can tell the WTF podcast started out as a way for Maron to find something to do after the demise of Air America, having its roots in recordings he made on the sly at the Air America studios after his regular shift. Now he produces the program from his garage in Los Angeles where he invites mostly other comedians and comedic actors over to chat for an hour or so twice a week.

The real key to the program is Maron’s volatile mix of self-absorption, self-deprecation and real need to connect with his interlocutors. Many of the guests he’s had on are guys that he’s known for more than a decade, due to having been a touring stand-up comedian. Many of these guys, like Patton Oswalt, have gone on to have more success than he, and Maron makes no effort to conceal his jealousy, but also his admiration.

The man really struggles with his own emotions and the fact that in his mid-40s he hasn’t necessarily achieved the kind of professional success that he sometimes thinks he should have earned. At the same time, he reveals the ways he’s been self-defeating and allowed his anxiety to undercut his efforts. In particular he spells out the way his own poor self-esteem has caused him to be kind of a dick to other people–friends, lovers, fellow comedians–and he expresses a sort of mixed regret for allowing his jealousy to get the best of him.

But if WTF was just a 90 minute monologue from a self-hating washed-up comedian I wouldn’t find it particularly interesting. What makes Maron’s podcast unique is that his bundle of insecurities is buffered by raw acknowledgement and a struggle to be a better person, which he works through with his guests. Depending on who is on the other mic, this might entail him recounting past episodes where he perceived some kind of slight from his guest that he now knows had nothing to do with him. More often Maron’s raw vulnerability results in his guests opening up and relating on a very unmasked level.

One of the most affecting recent episodes featured an interview with Dave Foley, a member of the Canadian sketch comedy troupe the Kids in the Hall, and star of the sitcom News Radio. In this interview Foley opened up about his first marriage to someone who sounds both abusive and unbalanced, which ended in divorce. But due to the divorce laws in Ontario, Foley confides that his child support payments are fixed based upon the income he was making at the height of his earning power with Talk Radio. However, many years down the line his income is a fraction of that, meaning he’s unable to make those payments in full, and has to go back to doing stand-up in order to pay the bills.

Of course, we don’t hear the other side of this story. But through this conversation with Maron, Foley doesn’t sound bitter or like a victim; he just sounds resigned, even if he admits he can’t travel back to Canada for fear of facing the court. Maron manages to handle the interview with empathy while also allowing some humor to come though.

Maron builds that empathy in the listener, too–both empathy with him and empathy with most of his guests. He has an experienced radio host’s penchant for building in some regular schtick to provide a semblance of predictability and timing, but also has enough skill to keep it from being too schticky. Kind of like Howard Stern, he articulates his own anxieties in such an honest and clear way that it’s easy to identify with him. When he talks about feeling jealous at another comedian’s success, but then feeling ashamed for his jealousy I think most people can relate to having been there at least once.

The interviews are pretty raw and mostly unedited. There’s plenty of four letter words–which Maron gets out of the way at the very top of the show making clear the “F” part of the WTF name–and talk about sexual and bodily functions. Compared to a lot of what passes for stand-up comedy WTF isn’t particularly graphic or gratuitous. It just sounds like what transpires when experienced comics and actors sit down to jabber for ninety minutes or so.

Maron’s WTF demonstrates to me how immediate and transfixing the podcast medium can be. The program delivers many so-called “driveway moments,” a name attached to those stories you hear on NPR on a driving commute home that make you stay parked in the driveway to hear how it ends rather than stop the car and risk missing a moment while walking into the house.

I particularly appreciate how WTF is a DIY affair. While Maron has a producer to help him with editing the program and running the website, the podcast doesn’t otherwise have a staff even as big as a local public radio program. This is not a man who started a podcast to pursue fame and fortune. This is a man who started a podcast because he had to, because he needed an outlet, and radio is something he’s good at.

A little more than a year into podcasting Maron has started to achieve some notice and recognition for the program. In January the New York Times published an accurate but flattering profile of him and the ‘cast. While he’s been a touring comedian for the last 20 years, he’s also taken the podcast on the road, recording some episodes live on the stage, or at the very least recording his interviews from his hotel room. I get the sense that the podcast is starting to gain him some renewed recognition, and a little more income. But at the same time, I also get the feeling that he’s dealing with the harsh reality that being an independent podcasting star is still not a terrifically lucrative gig.

For me, the irony of WTF is that while it demonstrates how good the simple radio interview can be, because of its rawness it can’t be on broadcast radio. I suppose Maron could make it on satellite radio, like Stern did, but I think the intimacy of working in the minimalist environs of his garage or a hotel room is part of what makes the program so good.

WTF is now one of the very few podcasts I’m making time for outside of commuting. Maron makes me want to get back to doing a radio program or podcast again. It’s a rare program that inspires that in me.