I’ve only lived in Chicago for two years, but I’ve been listening to WXRT in brief spurts for the last sixteen years when visiting the city. Living in the Central Illinois college towns of Champaign-Urbana, I’d often heard about WXRT from friends and acquaintances from the Chicago area. Inevitably it was the one station that ex-Chicagoans most commonly said they missed. While Chicago has a lot of great noncommercial college stations, all of them only cover a portion of the city and metro area. By comparison WXRT has great signal strength, covering the better part of Chicagoland.

Like a lot of FM rock stations, WXRT’s roots lie in that brief heyday of freeform radio in the late 60s and early 70s. The station’s rock programming began in 1972 as the nighttime portion of a programming schedule that primarily consisted of ethnic and foreign language programs during the day. It went all-rock in 1976 at the same time as most progressive rock stations started to be come more formatted and less freeform, birthing what would become known as the Album Oriented Rock (AOR) format.

XRT remained locally owned until 1995– a year before the Telecom Act triggered the onslaught of consolidation–when it was sold to Westinghouse, which would become Infinity broadcasting, now known as CBS Radio. Yet, somehow WXRT has managed to survive the era of consolidation and avoid becoming a homogenized, voice-tracked, syndication-saturated station. Instead, it remains a Chicago fixture and example of the Chicago approach to rock.

Let me give you an example of how WXRT earns my precious listening time. On the last Sunday of last month I turned on WXRT while cooking dinner. I heard the DJ announce that they would be replaying a concert the station sponsored and recorded at one of my favorite Chicago venues, the Hideout. Non-Chicagoans have to understand that this is not your typical big theater venue, or suburban sports bar that so many stations use for concerts. The Hideout is a small true music-lover’s place, tucked away in a warehouse district, across the street from the Chicago Sanitary Department. Already I was impressed to hear WXRT working with this mainstay of the Chicago independent music scene. 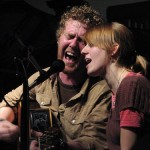 The band was the Swell Season, featuring the lead actors from the movie Once, both a movie and band I’ve come to really like. Normally I’d have turned off the radio in favor of an LP or CD while we eat dinner, but the concert kept us tuned in.

Not only was the concert a great, intimate performance, but WXRT ran the entire hour-long show without a single commercial interruption. I wasn’t expecting it to be commercial-free; there were none of the typical “commercial-free marathon” sweepers or other hype. Instead, they just played the show, without hype, and without a break.

This is the kind of thing I remember New York and Philadephia radio stations doing during my youth in the 1980s, but had largely considered a lost art in the post-consolidation era. Like WDHA, nobody is going to mistake WXRT for an indie rock or college station. The playlist is still pretty heavy on classic rock, but is also spiced with both older and contemporary alternative and indie rock artists. It still produces specialty programs that focus on the blues and local music, in addition to syndicated fare like Little Steven’s Underground Garage.

Although I still have to wade through obnoxious commercial sets, I find that my patience is still rewarded by WXRT, which is something I can’t say for any other commercial music station in the Chicago area. It may be one of the last of a dying breed, but I’m glad that WXRT has managed to be one of the rare radio survivors on the commercial FM dial.