The biggest news at this year’s Consumer Electronics Show might be Google’s new Nexus smartphone, but that doesn’t mean there’s no space for radio in all the gadget frenzy. Your resident RadioSurvivors don’t yet have the travel budget to jet off to Vegas to roam the show floor in person. Instead, I’m picking through the press releases and news stories (which often are just rewritten press releases) from cold and snowy Chicago.

Although I am not a car owner myself (I traded my old Subaru for a new bike this year–no lie!) the automobile is still the site of much radio listening, and the realm of some interesting tech developments. Internet and iTunes tagging appear to be the radio stars this year, with satellite playing a supporting role. As one of our readers pointed out, Ford recently announced that it would offer a factory-installed HD Radio receiver that includes iTunes tagging. In addition the company said it’s working on integrating tagging with Sirius satellite radio, which will also feature the ability to record and playback up to 45 minutes of satellite audio. Shades of Apple’s “live-pause” in the new iPod Nano? 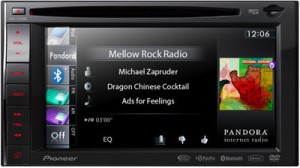 Sony also offers up a car HD receiver with iTunes tagging (CDX-GT700HD) and Pioneer offers up several new models with the same features. But their new top-end receiver (AVIC-X920BT) goes one better by adding support for Pandora. The catch is that you need an iPhone that connects via a USB cable. Once linked, then you can browse stations on the receiver’s 6.1″ display.

Alpine also takes the iPhone route to offer Pandora in your auto with its iDA-X305S receiver. No to be left out Ford promises Pandora integration along with Stitcher, which is apparently the news/talk yin to Pandora’s yang, and something I’d never heard of before. Yet again, Ford’s approach requires an intermediary, with SYNC project manager Julius Marchwicki promising,

in the future, if you bring Pandora or Stitcher into the car on your phone, it will work seamlessly. 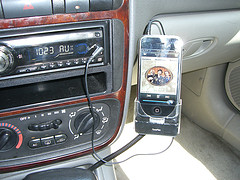 I hesitate to really say this is true mobile internet radio, since you’re still relying on a tethered smartphone. Sure, it’ll probably make changing stations easier than trying to fiddle with the phone itself, but car-broadband it’s not. This tentative step forward also will not make internet radio much more of a serious threat to satellite and broadcast in the car… this year. Until internet radio is inside the receiver in your dash–no USB cables, external receivers or smartphones–it will remain in the domain of gadget-freaks, geeks and gear-heads.

I’m also pretty unimpressed with the iTunes tagging feature. That’s primarily due to the fact that there’s very little impressive programming on HD Radio, such that I have a hard time imagining too many people diving for the “save” button. If it’s commercial radio they’ll have the song beat into their skulls every time they get in the car anyway.

Aside from Ford’s announcement, there isn’t much action on satellite radio so far at CES, though the Seeking Alpha blog’s Brandon Matthews passes along rumors that XM Sirius “completely changing its product line.” Matthews also notes that the CEO of mobile audio manufacturer Audiovox would be “unveiling new and exciting Satellite Radio products” at CES. But so far nothing for the car has appeared at the party.

A part of me is glad to see that radio is still grabbing some headlines at the big electronics hoedown in the desert. Maybe even analog broadcast might get some love.