By Jennifer Waits on January 26, 2010 in Emergencies, International 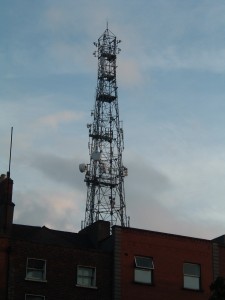 The power of the tower

In the aftermath of the devastating January 12th earthquake in Haiti, radio has played an important role in terms of keeping lines of communication open. A fascinating radio story on All Things Considered yesterday profiles one Haitian radio station, Signal FM 90.5, that has continued to broadcast after the quake hit.

As way of background, a Reuters story points out that:

“Radio, a main channel of communication in Haiti, is even more crucial since the January 12 earthquake that killed up to 200,000 people, collapsed many parts of Port-au-Prince and left half a million people homeless or living in refugee camps scattered across the coastal capital…

The radio story on All Things Considered tells a compelling tale about just how important Signal FM has been in helping find quake victims. According to the accompanying story:

“With all the capital’s newspapers and TV stations down, Signal FM was all there was. Frantic listeners trekked to the station seeking news of lost loved ones….the station put one woman on the air who said her husband was alive under the ruins of a bank building and begged rescuers to search for him…

‘And eight days after, she came here with her husband,’ [station founder Mario] Viau says. ‘That guy gave me a hug that I will never forget. That guy almost choked me to death, he was holding me, so happy, telling me, “Thank you, thank you, thank you so much.” ‘

As the days went on, Signal FM told Haitians how to begin to handle the catastrophe. Doctors, engineers, seismologists and clergymen went on the air. They told people what to do with dead bodies, where it was safe to sleep, what to do about natural gas leaks, where they could locate medicine and food, and where to find God amid the agony.”

According to the Reuters article, “To keep people informed, U.S. troops have distributed thousands of wind-up and solar-powered transistor radios.”

As we hear these tales from the front, it’s an important reminder to all of us that in an emergency, radio has the ability to be truly heroic.