By Jennifer Waits on September 4, 2009 in History, Information 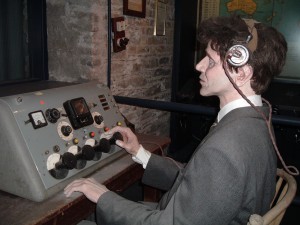 Along with my obsession for radio I also have a special place in my heart for wax museums; so imagine my glee when I discovered the bounty to be found in Ireland at Cork’s Radio Museum.

One of my first stops during my vacation to Ireland last month, the Radio Museum Experience is located in the Cork City Gaol Heritage Centre. The gaol (or jail) opened in 1824 and housed prisoners until 1923. After the inmates left, radio set up shop on the old jail site.

Beginning on April 25, 1927, radio broadcasting began on the premises in the Governor’s house. The early station, 6CK, became part of the national radio network of Ireland: Radio Eirann (later Radio RTE) and broadcast from the old jail until the 1950s. (By the way Radio RTE has a portion of its website devoted to history of the network’s public service broadcasting, including photos from the 1920s.) 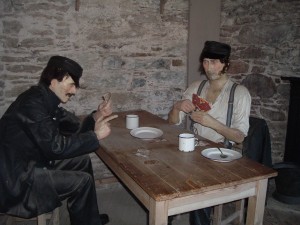 My trip to Cork’s “Radio Museum Experience” began with an audio tour of the jail; complete with cells filled with creepy wax figures.

As we ended that tour and returned the old school museum-issued cassette player/headphone combos we asked about the radio museum. We were told that it was closed because it wasn’t working. After we explained that we were there mainly to see the radio museum, they invited us upstairs to check it out.

I thoroughly enjoyed poking around the Radio Museum. I’m not entirely sure why it was closed, except for the fact that lighting was dim in places and some of the audio components weren’t working. 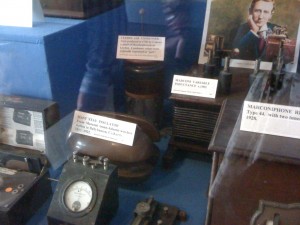 On display were collections of old radios, vintage broadcasting equipment, and a re-creation of the original studios of station 6CK. You could also catch tidbits of old radio broadcasts, see a map of early broadcasting stations from around the world, and read about the history of radio in Ireland. A bonus for me was seeing the corpse-like wax figure propped behind the board in the old studio. 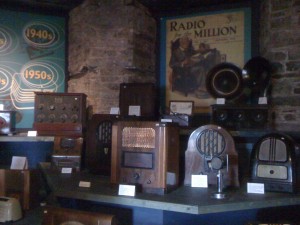 Since I’ve been reading a lot about radio in the 1920s recently, my visit to the Radio Museum in Cork was timed perfectly for historical reflections.

I’m glad to see that these artifacts are being preserved and that there’s an opportunity for people to take a look at Irish radio history.

But it also saddens me that the exhibit wasn’t really open to the public. Hopefully it will be up and running again soon for all to enjoy. Otherwise it becomes yet another example of radio increasingly fading away from view.

FCC lets radio off the hook in content filtering inquiry
AM on FM Begins Oct. 1
Support Radio Survivor on Patreon!