By Matthew Lasar on October 5, 2015 in Community Radio, Public Radio

For the last six months the community around struggling community/public radio station KUSP in Santa Cruz, California has been rethinking itself in terms of trees. Earlier this year the signal posited a host of models, among them scenarios dubbed “fig” (news), “walnut” (BBC), and “maple” (NPR on the hour). But in the end, after shedding its general manager last month, the operation appears to be moving towards a music format adopted by around 150 radio signals across the United States: Triple A, aka “Adult Album Alternative.”

“PMC sees potential in a programming/format shift to a local, professionally programmed and hosted music format that would be described, in radio format terms, as Triple-A (or ‘AAA’) . . .

The Music Format, if done right, will share audience rather than compete for audience with KAZU. It will also be connected to the Santa Cruz/Monterey Bay region and residents by programming regional music and musicians, convening and partnering with local events and with community and cultural groups.”

If you are looking for extant public radio AAA models to grok this recommendation, the document cites Minnesota public radio’s The Current, Austin’s KUTX, and WXPN in Philadelphia. The Assessment Report also rather strongly suggests that KUSP’s current format, an NPR laden schedule designed to compete with neighboring station KAZU in Monterey, has failed. “KUSP’s news and information audience and loyalty is low and, for the most part, secondary to KAZU’s news and information audience,” the document says. “While there have been suggestions that improving or adding additional local content might improve audience, our analysis is that it will not.” 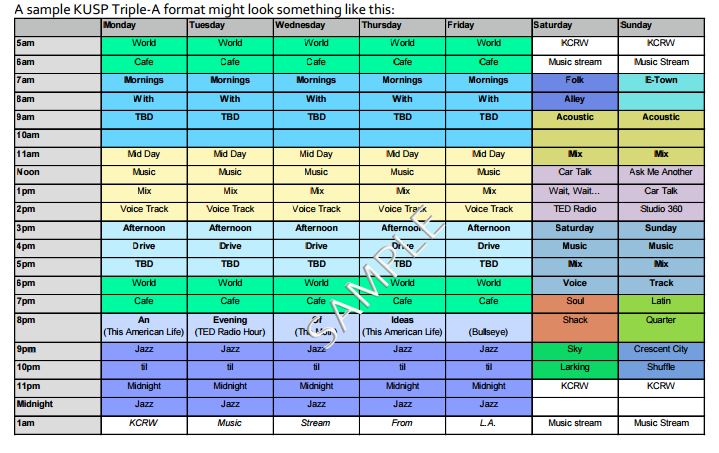 From this hypothetical schedule, it looks like KUSP will stream some popular public radio programming like World Cafe, This American Life, and Car Talk re-runs, while stripping in local music shows across the day. I’m guessing, however, that the actual music content lineup is still very much up in the air. In any event, all this will have to happen quickly, the outline notes. “KUSP is financially broke,” it warns, operating without any unrestricted cash surplus despite several recent donations of over $250,000. “At this point, the history of the Station’s financial crises is not relevant. It is a fact that must be dealt with.”

The recommended transition schedule goes as follows: first hire an interim general manager, which has already happened. His name is Lee Ferraro (formerly of WYEP in Pittsburgh) and he is charged with getting the new AAA format running by November 1. Ferraro must also raise around $150,000 by then via major donors and/or foundations. This should be accompanied by the hiring of a permanent general manager (if possible), a development director, and the obtaining of an additional $200,000 through December. The Holy Grail is holding KUSP’s first Triple-A membership campaign sometime between January and March of 2016.

Here’s a chart outlining the hoped for financial future of KUSP under the new format. 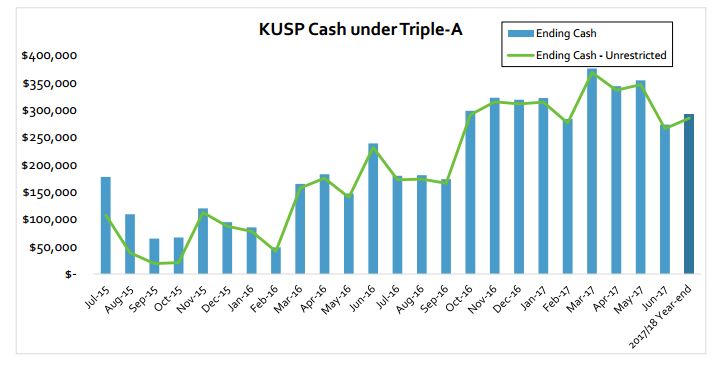 This summary barely touches on the content of the report, which is definitely worth reading in full. Only lightly mentioned in the assessment is how the new KUSP will coexist with the Santa Cruz area’s various music stations: KPIG, KKUP, and the University’s KZSC-FM, among them. But the document does suggest that the transition will have to be closely managed.

“Triple A programming will draw listeners from KUSP’s tent poles, KAZU and KPIG,” it advises. “In order to make this decision work, KUSP will need to devote resources to their decision. KUSP will need to have control over music selection and how the air talent presents the music to make sure there is a consistent appeal.”