By Jennifer Waits on October 5, 2012 in College Radio 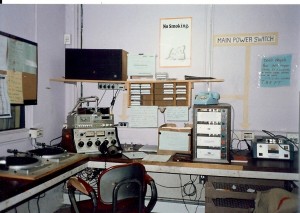 WHRC at Haverford College – the Station that Changed My Life (1987 photo by R. Waits)

Tuesday was the second annual College Radio Day and in light of that a number of people pontificated on the state of college radio. In a piece in Vice magazine, former college radio DJ A Wolfe interviews the Program Director at WIDR (Western Michigan University) and discusses the importance of college radio, saying:

“Anyhow, it’s National College Radio Station Week, and to show appreciation to the basements and studios where many of us in the music industry got our start, we’re talking with program director Kevin Yelvington of my alma mater, 89.1 WIDR-FM Kalamazoo, from lovely Western Michigan University. This sixty-year-old station was much more instrumental on my future than my actual undergraduate degree, so take note, colleges and universities across the country: We only went to your shitty school because of the radio station. Do not take it away…”

In the interview Yelvington also talks about how working at the radio station provides real world skills, saying, “It’s not that my education isn’t important, but I’ve learned so much here that’s applicable to the real world, because it’s in the real world and we’re facing very real problems here. In fact, if it weren’t for WIDR, I probably wouldn’t be doing as well in school as I am now, and maybe wouldn’t be going to school altogether.”

For those of you who have participated in college radio, how important was it to your college experience? What kind of influence or impact did it have on your future career?

NAB debating the future life or death of AM Radio
Pitch Your Radio Story for World Radio Day
Support Radio Survivor on Patreon!