By Paul Riismandel on September 11, 2012 in Commercial Radio, Consolidation, Music 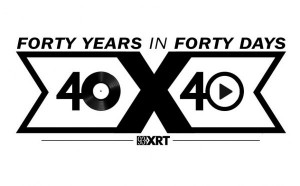 It’s an increasingly rare thing to find a station that has maintained its format (and call letters) for more than a decade, nevermind 40 years. This week Chicago commercial rock station WXRT

begins celebrating its fortieth year on air with something called “40 years in 40 days.” Starting Monday, each day the station is highlighting a different year from XRT’s lifetime, featuring music, interviews and other archive content from that year.

I’ve written before about how WXRT is one of my favorite commercial stations, in part because the station still airs programming that recalls the best aspects of stoned-out, home-taper 70s progressive rock radio, like the commercial-free concerts that air every Sunday night. A Gen Xer like me could tune in on a weekend and easily think he’s been transported back to the 80s or 90s as he hears local specialty programs like Breakfast with the Beatles, Saturday Morning Flashback and Local Anesthetic. In fact, when the station’s rock format debuted in ’72 it was nighttime-only, with the daypart broadcasting ethnic and foreign-language programming. It wasn’t until 1976 that the early bird or night owl could both enjoy progressive rock 24 hours a day.

The survival of WXRT as a rock station with live DJs and a programming ethic consistent with its foundational roots is all the more exceptional given that the station was bought by Westinghouse in 1995, the year before the devastating Communications Act of 1996, whose radio deregulation midwifed the massive consolidation that rapidly sucked the life out of commercial radio. The year of the Act delivered the newly legal merger of Westinghouse and CBS, which brought WXRT into the Infinity Broadcasting, then CBS Radio roster.

I am impressed that CBS has seen fit to keep WXRT largely intact, even as other stations became more tightly playlisted and automated. We’d like to hear from Radio Survivor readers about your favorite commercial stations that have maintained, rather than diluted, even as the waters of consolidation rushed around them. Tell us in the comments.